Reviews for The Most Powerful Idea in the World

"The Most Powerful Idea in the World is a sneaky history – ostensibly about the origins of the steam engine, though actually about much more. As someone who spun an eclectic history from small things in his previous book, Justinian’s Flea: Plague, Empire, and the Birth of Europe, Rosen is a natural and playful storyteller, and his digressions both inform the narrative and lend it an eccentric and engaging rhythm.…offering a forceful argument in the debate, which has gone on for centuries, over whether patents promote innovation or retard it.

"Those who believe passionately, as Thomas Jefferson did, that inventions 'cannot, in nature, be a subject of property,' are unlikely to be convinced. Those who agree with the inventors James Watt and Richard Arkwright, who wrote in a manuscript that 'an inventor’s life without patent is not worthwhile,' will cheer. Either way, Rosen’s presentation of this highly intellectual debate will reward even those readers who never wondered how the up-and-down chugging of a piston is converted into consistent rotary motion."

"Mr Rosen subscribes neither to the “great man” or the “historical inevitability” schools of history, and his account is wonderfully eclectic. Stalwarts of the industrial revolution such as Thomas Newcomen, a West Country engineer, rub shoulders with John Locke, a political philosopher, and Edward Coke, a lawyer and jurist who did much to shape the common-law traditions of intellectual property... The author dismisses the more traditional explanations about why the industrial revolution began in Britain—such as an abundance of coal or the insatiable demands of the Royal Navy—concluding, instead, that it was England’s development of the patent system that was the decisive factor. By aligning the incentives of private individuals with those of society, it transformed invention from a hobby pursued by the idle rich into an opportunity for spectacular commercial gain open to anyone with a bit of skill and a good idea. That allowed England to harness the creative potential of its artisan classes in a way that no other country had managed before. It is a plausible conclusion and Mr Rosen makes a powerful case.

"The book has a crackling energy to it, often as riveting as it is educational. Rosen, in pursuit of evidence, makes interesting, even exciting, such subjects as patent law from the Roman Tiberius on, technological innovation in ancient China and the role of practice in separating out accomplished performers from the 'merely good'...[the book] has a logical progression that's hard to refute — explored in chapters with titles like 'The Whole Thing Was Arranged in My Mind: Concerning the surprising contents of a Ladies Diary; invention by natural selection; the Flynn Effect; neuronal avalanches; the critical distinction between invention and innovation; and the merits of strolling on Glasgow Green.' The playfulness and invention evident in these descriptions carry over into chapters rich in detail and imbued with a sparkling intelligence."

"Rosen delves into the psychology of invention, and praises now-forgotten men such as master engineer John Smeaton, who brought analytical rigor to what had largely been trial-and-error tinkering. But his core insight, and the source for his title, is that the Industrial Revolution depended on a constant outpouring of ideas: new inventions, refinements to old inventions, new uses for existing machines, and so on....Regardless of what one thinks of Rosen's core thesis, he is an able guide through some pretty dense scientific and intellectual thickets. And he has a knack for witty descriptions and analogies, which help the reader navigate the deeper waters. Seventeenth-century figures Edward Coke and Francis Bacon, he writes, "were so hostile to each other that they would have reflexively taken opposite sides on a debate over the best way to prepare roast beef."

"What William Rosen neatly does with his book, subtitled 'a story of steam, industry, and invention' is to manage to make this hugely important topic -- this is, after all, the story of the formation of the modern world -- fresh and interesting...One of the things that makes this book so enjoyable is the detail of the research -- the author clearly really likes diving into obscure detail, then bringing it out in a way that intrigues...An excellent book that should be essential knowledge for all of us in the modern world."
Brian Clegg in Popular Science

"The character sketches are good and the author has a whimsical touch sprinkled with humour....A fascinating section covers the thinking of inventors. Drawing on the work of others via a pyramid of genius, most inventors struggle for years with a problem until their eureka moment. Invention cannot be forced but certain conditions encourage it."
Fergus Mulligan in The Irish Times

"By exploring human development from the dawn of history, Rosen lays down important groundwork for the fascinating examination of the Industrial Revolution which forms the greater part of his book. This is history at its most accessible, and all the better for it.
Robert Colbeck in The Yorkshire Evening Post

"In this infectiously enthusiastic, all-encompassing investigation of steam power and the men who drove the industrial revolution, [Rosen] argues that Britain's competitive advantage derived not from the invention of steam power but from the army of backroom tinkerers who developed it...With greasy-fingered glee [he] describes the exact mechanisms of the self-acting valve, the plug rod, the F-shaped lever, and the splendidly (and onomotopoeically) named Snifting Clark that made the whole beast possible."
James McConnachie in The Sunday Times

"As [Rosen] states in this intriguing, witty account of the birth of steam power, [James Watt’s] walk on Glasgow Green was 'one of the best recorded, and most repeated, eureka moments since Archimedes leaped out of his bathtub.'"
Robin McKie in The Observer>

"As a piston-driven primer not only to the processes of thought, labour, and collaborative generosity of the fathers of steam, this book runs along a new track like -- well, like a Rocket."
Iain Finlayson in The Times

"Why Britain? What was peculiar to a smallish island in north-west Europe that turned it into the first industrial nation? Rosen isn't the first writer to attempt an answer, but I can think of no other book that combines so many aspects of the story so clearly and elegantly....its scope and lively intelligence make it the best kind of popular account. Anyone who has ever wondered over Britain's exceptional contribution to the modern world should read it."
Ian Jack in the Financial Times

“Central to Rosen’s account is his amply demonstrated thesis that 'inventions don’t just solve problems; they create new ones, which demand—and inspire—other inventions.' An immensely readable and droll stylist, Rosen even leavens his footnotes with humor. In a passing reference to Francis Bacon, he observes, ‘It is impossible to write about Bacon without mentioning Rosicrucianism, Freemasonry, and the authorship of Shakespeare’s plays. Consider them mentioned."
Bookpage

"Rosen's narrative meanders between diverse subject threads from patent law through mining to physics and economics… his writing style is generally clear, with humorous asides, and with an overall approach reminiscent of the science historian and broadcaster James Burke. Readers will find thought-provoking this serious history of technological innovation and the veritable invention of our modern world"
Library Journal

“The Industrial Revolution inspires more academic theories than absorbing narratives. Rosen, however, crafts one from subplots that connect with primitive industrialism’s premier symbol: the steam engine…[It] provides Rosen with storytelling opportunities that include capital investors, scientists studying heat, and innovators who improved the machine from a stationary to a mobile power source.”
Booklist

"William Rosen has written a most powerful story, one with a heroic cast of characters and an ingenious set of machines. His recounting of the invention of the steam engine puts it in the historical and cultural context that the achievement and its legacy deserve."

--Henry Petroski, Aleksandar S. Vesic Professor of Civil Engineering and
Professor of History, Duke University; author of The Essential Engineer:
Why Science Alone Will Not Solve Our Global Problems

"In this deft book, Rosen explains how this most whispy of commodities [i.e. steam] lies behind the world's transformation from one giant farm into a series of industrial clusters. As in his earlier book, Justinian's Flea, Rosen is skilled at hooking small, local phenomena into a narrative of global sweep and significance."
--The Guardian(Spring 2010 Preview)

“Ambitious and learned…Ordinary readers will be swept along by the strong current of Mr. Rosen’s erudition”

“Don’t charge William Rosen with lack of ambition. Instead of biography or the thin slice of the past that has become popular with history publishers, he presents us with no less than the foundations of the modern world”
- The Baltimore Sun

“What really impresses is the sense of ease the author manifests in whatever subject he enters. His eloquence, wit, narrative skill, learning, and (one dares to say) compassion hoist his book above the miasma of its deeply somber subject and make it, strangely, a joy.”
- The Independent

“Rosen writes what might be called champagne prose: it slips down easy but carries a punch. He covers not just the centers, but the extremities of knowledge.” 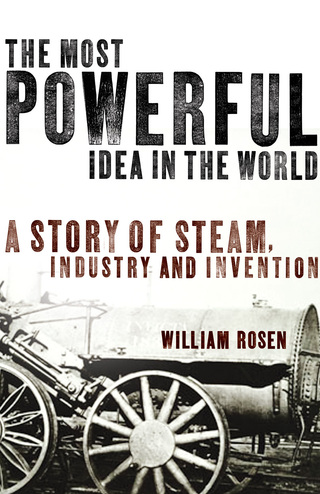 The UK edition, from Jonathan Cape

P. 149 "'...the other elements bound to the metal, particularly the quantity of silicon and quality of carbon..." [Thanks to John Lampling]

From BarnesandNoble.com
From Powells.com
From Amazon.com
Find an IndieBound bookstore